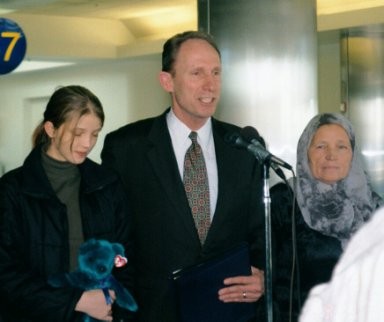 Update: Amela with her husband in 2010, expecting their first child.

Imagine a large, empty room in an old warehouse where, in one corner, a small, makeshift Catholic chapel has been erected. The room is serene. “This is our ‘ecumenical’ room,” said Dr. Horacio Aziz, Pittsburgh-trained transplant hepatologist and director of the Argentine Transplant Foundation. He extends his hand in the direction of the vast, dark space and imagines the future. “We want the families of our transplantees to set up chapels to their own faiths here when they become our guests. We want this to be a place of solace, of peace, of spiritual comfort–for every member of the transplantees’ families, who are far from their homes, as they wait for the operation of their loved one to take place.”

Indeed, there is plenty of empty space for other such places of worship to be set up in this room. Donated by the state and furnished with donations from individuals and companies, the warehouse that has become the “Transplant Home” is efficiently run by Sister Gladys Percara with the able help of Daniel Ponce–both of whom are liver transplantees. Despite the declining availability of government aid for the foundation, Dr. Aziz accepts many transplant patients even when they are unable to pay for their surgery, and their families are never charged for room and board. He, Sister Gladys, and Daniel Ponce are motivated by their faith in their mission, and they continue their work with the help of donations from generous private sources. The most recent of these sources is “Project Amela,” funded by a small group of private American donors whose efforts have been facilitated by the World Children’s Transplant Fund.

Mark Kroeker, founder and chairman of WCTF, met an 11-year-old girl in Bosnia three years ago while stationed there as a deputy commissioner of the United Nations International Police Task Force. Her name was Amela Kovacevic, and she desperately needed a life-saving liver transplant which was impossible to obtain in her own country. After his return to the States in 1999, Mark mentioned Amela’s plight at a WCTF board meeting. “WCTF is prohibited by charter from funding individual cases” he reminded us, “but I have given my word that I will help save this girl’s life.” And so, much as he had eleven years earlier after meeting Veronica Arguello–the Argentine girl who inspired the founding of WCTF (see “The WCTF Story“)–Mark set about raising the funds for Amela’s transplant on his own.

Several weeks before I heard about Amela, I had a most interesting conversation with Drs. Federico Villamil and Gustavo Podestá of the Favaloro Institute here in Buenos Aires. I learned from them that the cost of a liver transplant in Argentina is one-third the cost of a transplant in the United States, and that the survival rate is as good in Argentina as in the best transplant centers around the world. Specifically, their team has operated on 38 patients in the past four years, with a survival rate of 95%. So, I subsequently suggested to Mark that he try to send Amela to Argentina for her operation. The idea was unusual, perhaps even radical, at the time. But as the months passed and sufficient funds for “Project Amela” were not forthcoming, the idea of having Amela transplanted in Argentina became a more realistic solution than attempting to accomplish the same thing in the United States.

While all of us at WCTF understood that “Project Amela” was essentially a private endeavor, we also recognized that the goal of helping her was not at cross-purposes with WCTF’s mission–not at all! It became very clear to us that while private donors could help Amela get a new liver, we could help the thousands of “Amelas” around the world by publicizing her case. What better way to dramatize the need for pediatric transplantation services in Bosnia and other developing countries than to show the world Amela’s odyssey from her Muslim village hours from Sarajevo, to Buenos Aires? WCTF helps bring medical training, technology, and education to third-world countries precisely in order to *avoid* the “export” of children to the first world for life-saving organ transplant procedures. Thus, as the plan developed to transplant Amela in Argentina, Mark, the WCTF staff, myself, and an ever-growing number of dedicated volunteers committed ourselves to coordinating the many details of the plan and publicizing “Project Amela” to the press.

As we achieve success in our efforts, fewer and fewer children will have to undergo arduous journeys like Amela’s to save their lives. More children will receive the specialized medical care they need–right in their home country, and at a fraction of the cost in the U.S. Thus, a dollar donated to the World Children’s Transplant Fund translates into many more valuable dollars and more transplants in the future. Think of all the Amelas in Bosnia who were not fortunate enough to come to the attention of Chief Kroeker. Think of all the sick children in other countries whose chances of getting transplants at present are very slim indeed. With centers in these countries like the ones WCTF has established in Argentina and Costa Rica–where transplants are now part of mainstream medical services–their chances of survival will increase exponentially. Quite simply, many more children will live instead of die.

A related benefit of our work is the improvement in general health care wherever there are transplant services. Once a hospital has this capability, it can provide better care for all its patients. Transplant surgery is good medicine, and the technology and training required for these relatively rare procedures results in newer equipment, upgraded intensive care units, and improved technical skills for doctors and nurses–simply better medicine all around. We read about the survivors of transplants; but we do not read about the other patients who would not have survived if transplant technology and training had not been available at their hospitals.

Back to Amela’s Argentina Story

Amela–now 14 years old–her mother Ferida, and her brother Jasmin arrived in Buenos Aires on February 4, from Portland, Oregon, via Los Angeles. They were welcomed with open arms by Dr. Aziz and his helpers as well as President Natalio Marcovic and other members of the “Circulo Croata” (roughly translated, Croatian Social Club), the Bosnian community here in Buenos Aires. Imagine the family’s reaction upon seeing Daniel Ponce, muscular and full of life, with his liver surgery scar! And imagine their comfort and pleasure in the company of their countrymen, with whom they communicated easily in their native language. From that point forward, at least one member of the club has been with the Kovacevics constantly to provide translation and bridge the language barrier.

Natalio, also an engineer at the Argentine Atomic Energy Commission, took us to visit the club’s meeting place. The first Croatian immigrants to Argentina founded the club in 1926, when Argentina was a huge magnet for those starving in Europe. The children of these immigrants have continued the Croatian traditions, which include colorful dances with authentic costumes. The picture of the Virgin of Croatia stared at us from the wall. And the love for Amela and her Muslim family was quite evident in all the members of the Circulo Croata. Their spiritual connection was so real and beautiful. Amela looks so happy here in Buenos Aires!

Rene Favaloro was a giant of Argentine medicine. He was well known for the invention of the first heart bypass graft at the Cleveland Clinic, which revolutionized heart surgery. At the peak of his success, he returned to his homeland to realize his dream: a state-of-the-art health center.

Walking into the Favaloro Hospital in Buenos Aires is like entering any of the most advanced medical centers in the world. Modern and technologically efficient, one can see the quiet dedication in the faces of the staff. Although there are several transplant centers in Argentina, the Favaloro is one of the best–in fact, it is one of the best in the world. The Center was built strictly with private donations in a country where donations are by and large not tax deductible. While the technology is first-rate, the patients are also given that special Latin affection, which is so personal and warm. Everyone is made to feel at home.

When I met again with Drs. Villamil and Podestá–who were trained in the United States under WCTF auspices–they in turn pledged that they would continue WCTF’s mission by helping to train doctors in other developing countries. In fact, the International Liver Transplant Society, of which Dr. Villamil was elected president earlier this month, has pledged to help developing countries train their doctors to do transplants in their own back yards, so to speak, so that cases like Amela need never happen again.

The surgery took place today, February 23, 2001. A portion of Jasmin’s liver was transplanted into Amela, in what is termed a “living related donor” transplant procedure. I am very pleased to report that the operation was a success! And, that both Amela and Jasmin are progressing very nicely in their post-operative recovery. Many thanks and congratulations to Drs. Villamil and Podesta and their team for a job well done!

With the success of “Project Amela,” Mark Kroeker and WCTF have completed a poignant journey. Veronica Arguello was brought to North America thirteen years ago because she could not get the transplant she needed in Argentina, her homeland. Her tragic death gave life to the World Children’s Transplant Fund–which in turn made transplants possible in Argentina–which in turn has saved the life of Amela Kovacevic. But the journey is not ended–not until transplant capabilities are a reality in Bosnia, Armenia, the Philippines, and every other place in the world where there are sick children waiting to die for want of a new organ and the doctors and equipment to save their lives.

P.S. Though no funds were ever requested, a small portion of the money raised by Mark Kroeker for “Project Amela” went to the Argentine Transplant Foundation to support the family’s stay at Dr. Aziz’s Transplant Home, where Amela and her mother will continue to stay while Amela is monitored during her recovery period. Every penny of this small grant of only $1,000 will be stretched to its maximum value by Dr. Aziz and Sister Gladys, to provide services to as many transplant patients and their families as possible. And, with the help of volunteers and Amela’s family, a small mosque will now replaced the emptiness of a corner of the room in the warehouse…

"When the children of our world die needlessly and without hope, a piece of us dies with them whether we know it or not. And when we help just one to live, we find a small piece of immeasurable, indescribable joy."